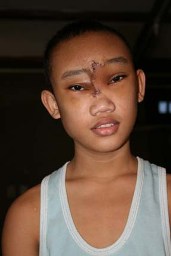 Vanvan: “I can see!”
Van Mark Elisan is now on his way to a new life.
Last May 30, Vanvan was operated on by Philippine General Hospital doctors. He emerged from the operating room several hours later with a huge gash on top of his head (where the surgeons split open his skull) but only a few stitches on his face where a big growth used to be.
Upon regaining consciousness at the recovery room another three hours later, Vanvan’s first words were “I can see!” He was not blind and the operation was not on his eyes. The boy was referring to the wonderful new experience of stereo vision where the right eye can see to his left side and vice versa.
Vanvan’s operation was made possible by the Barnes family who took pity on the boy and looked around for help. They ended up financing most of the expenses themselves except the actual surgery, which was achieved through the help of the PGH and the World Craniofacial Foundation. The entire Barnes family was ecstatic about the success of operation.
Equally happy is Eden who saw the project to the end through four frustrating delays, epilepsy attacks, new discoveries of Vanvan’s health problems, red tape and Third World health care service. Everyone thought it would take only a month. But it’s been three months and still counting.
Vanvan is still recovering at the CERV dorm in Quezon City. He walks in the mornings and in the afternoons. All the staples on his head were already taken off, the swelling on his face are all but gone. Vincent has succeeded in making him stop nibbling at his right hand. And while he has to take lifetime medication for his epilepsy, he has already gained weight and become taller under Vincent and Eden’s care.
Vanvan still needs a lot of help. Because of his family’s poverty and the stigma brought about by his past physical appearance, Vanvan stopped schooling at age eight and consequently forgot how to read and write. He is also displaying a mild form of mental retardation. CERV is asking the school in his village to take him in as a first grader again next month. There will be more check ups as well.
Giving the boy a new lease on life has been a very difficult journey. But to see Vanvan smiling at himself on the mirror makes it all worthwhile. We hope the entire Barnes family would be able to witness it sometime.
You can see more pictures of Vanvan here
Posted by Malcolm Trevena at 8:43 AM