A volunteer’s impression of the flood calamity in the Philippines 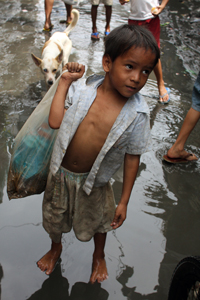 Following is Shafaq Varghese’s note of the effects of the floods that hit Metro Manila and nearby provinces.  Shafaq is a Pakistan-born American and is an IT consultant in Texas.

Visiting the areas affected by the flooding was a heart-wrenching experience. The devastation was limitless. In one of the   hardest hit areas, numerous houses, which had originally been built alongside a major river, had been flattened and the homeless victims were scattered on the streets living in temporary spaces made up of plastic sheets tied together with thread.  Garbage, which was basically household items destroyed by the flooding, was piled up on every street corner and outside every house. It was obvious that anything these residents owned, in an already poverty-stricken area, had been washed away or spoiled by the flood.

In one street corner hundreds of people were standing in the sweltering heat, in lines that stretched around several blocks, to receive aid from their local community leadership.  I was skeptical on whether enough aid would be available for the hordes of people waiting.

The family we visited to provide aid to had lost everything they owned in the flood. Their house had been submerged in water and they had survived by taking shelter in their neighbor’s two-story house. Every single piece of clothing and furniture this family owned was covered with thick mud. They had no food, no drinking water or clean clothes. And even though they had started the cleaning process, it was obvious that in the absence of proper nourishment and basic amenities, it would be weeks or even months before they would be able to have a normal life again.

The same story was repeated in the hundreds of other houses that we passed by. From the families scavenging through their destroyed goods for items they could still make use of, to the one living inside a truck because they had lost everything, to the group of people holding a vigil on a bridge for a drowned child, everywhere I looked, the only thing  visible was utter destruction and  suffering.

In the three and a half hours that we surveyed the area, we saw just two aid operations in progress, one through a UN agency and the other through Red Cross. From the size of the trucks and the number of victims standing in line to receive aid, it was clear that the rations provided by these aid operations would be inadequate.  Worst still, there wasn’t a single medical program in progress to provide temporary medical care or check-ups to the victims. With millions of dollars worth of aid coming into the Philippines just for the sole purpose of providing food, water, shelter and medical care to the victims of the flooding, I wondered where the money was being spent if not in the area with the highest number of casualties.

Clearly, the government and other aid agencies need to take additional steps to reduce the suffering of the people affected by the flooding, most of whom are now living on the streets and are highly susceptible to diseases, mal-nutrition and probable death.  This includes, first and foremost, providing additional food, clean water and medical help, in order to prevent further fatalities and the spread of diseases. Rebuilding the houses and cleaning the streets of the loads of garbage scattered everywhere would be the next significant step.  These must then be followed by providing safer and more stable housing in the areas more prone to rain and flood damage, in order to prevent such widespread disaster and loss of life in the future.

CERV is asking everyone to repost and donate to this link.

For more pictures of the victims of the flooding, please look here.

Posted by Malcolm Trevena at 8:05 AM