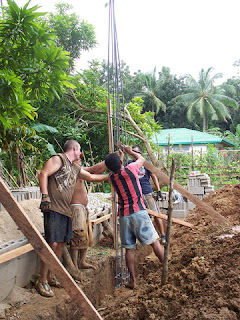 CERV announces the creation of a new program and the dissolution of one if its original programs.

“We are pleased to announce the creation of our Children’s Reading Program as we are saddened that we have decided to shelve one of our original program offerings—the Health Program,” CERV co-founder and director Raymund Villanueva said.

CERV also announced the cessation of its Manila placement operations after one of its staff bid the organization goodbye due to health reasons. The Philippine program retains its popular School Building, Teaching and Environment programs in San Agustin, Romblon.  This picturesque and peaceful coastal town a hundred kilometres south of the Philippine capital Manila is CERV's project area.

CERV is currently building a two-storey structure at the site of its mangrove nursery in San Agustin, Romblon, slated to be completed in October this year.

“A library will be put up on the building’s ground floor where students from San Agustin schools may read, conduct research, and borrow books,” he said.

While there are about 15 or so primary and secondary schools plus a satellite college campus in San Agustin, there is no proper library in this town of  about 30,000 people.  Most of the schools have reading corners at best and the number of books available is inadequate.  CERV volunteers have repaired and enhanced existing library spaces but the lack of books is an overbearing problem that prevents most students from conducting proper research and start loving to read.  Research through the internet is a remote possibility as ownership of computers is limited to less than one percent of San Agustin residents and internet connection is woeful.

Volunteer Leighton Wood has donated $5,000 (Canadian) to jumpstart the construction and is in fact in the Philippines for the third time to spearhead the building himself.  Leighton saved up for nearly two years for the project.

Volunteer Richard Kastenschmidt and wife Renee of the United States has consistently donated funds to buy power tools to aid Leighton and the local builders in the construction.

Volunteer Dagmar Gaber sent two boxfuls of books from Germany that will serve as the initial batch of books that will be lent around.  Dagmar is a member of Book Crossings, an international book lovers club that “frees” books after they have been read by its original owners to be enjoyed by a greater number of people.

“Our funds are still insufficient at this point to finish the construction and we need more books to start coming in, especially reference books like encyclopaedia, in order for us to meet our self-imposed October opening date,” Raymund said.

CERV is appealing for more cash and book donations.

Raymund said they are excited about the reading program.

CERV said that Reading Program volunteers shall have their tasks cut out for them.  First, they would have to catalogue the books and arrange them according to subjects.  Then they would go around the schools to announce the library’s establishment and invite the students to visit, read, conduct research and borrow books.

Since CERV now owns a small vehicle, the volunteers may later go around the schools to collect borrowed books and lend new ones to reading club members.

“Our objective is to introduce the wonderful world of books to the thousands of San Agustin students.  Children in developed countries take this privilege and pleasure for granted, but rural communities in the Philippines are not so blessed,” Raymund explained.

Reading club membership shall not be limited to students.  Out of school youths may be invited to join.

Introducing the joy and discipline of reading and conducting proper research will complement formal tutelage in classrooms, thereby enhancing the quality of education that are given the children of San Agustin.

Volunteers shall also assist the students conducting research at the library.

“There is an instant feedback mechanism in this kind of program.  The more borrowers and visitors to the library, and the more requests for read-along sessions, the better the volunteer is performing in this program,” Raymund said.

Temporary shelving of the Health Program

Which is the exact opposite of the Health Program.

“It is hard for us to assure a consistent volume work for our health volunteers as everything is largely dependent on the number of patients at a given time,” explained Raymund.

It is not that there are no sick people or ailments that need medical attention in San Agustin.  CERV does not have a clinic of its own and it can not afford to hire a supervising doctor (as required by Philippine laws), and buy medicines and equipment.

“If we can not guarantee consistent volume of work, then we are forced to consider our options,” CERV said.

But CERV will still accept health volunteers who would be bringing their own medicines and basic equipment.

“One possibility is for group of medical professionals or students to conduct focused medical missions—such as vaccinations, dental clinics, health education campaigns—provided that they bring the medicines and the equipment they need,” Raymund said.

The CERV building that is being constructed may also CERV as a community clinic, he added
Posted by Malcolm Trevena at 1:53 PM